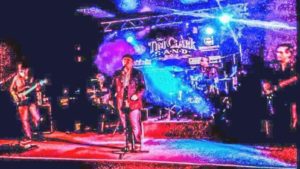 Since their inception, The Tim Clark Band has been wowing audiences wherever they appear. Not only did they quickly become the top-drawing band in their hometown of Myrtle Beach, SC, but they are also recognized as one of the most popular and versatile bands touring the Southeast.

Of course there is good reason for this! Fronted by Tim Clark, who is arguably the finest front man on the East Coast, they are known for adding their own flavor to favorite hits of the 70s, 80s, 90s and today. Tim has been entertaining audiences up and down the East Coast for over 2 decades. As lead singer for the immensely popular Charlotte, NC band Sugarcreek, Tim perfected his unique brand of showmanship, displaying a natural gift for winning over an audience. He is both a talented singer and masterful entertainer…and now he has assembled an incredible group of players who compliment his style and raise The Tim Clark Band to another level.